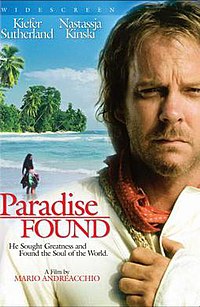 Paradise Found is a 2003 biographical film based on the life of Post-Impressionist painter Paul Gauguin. Starring Kiefer Sutherland as the title character, alongside Nastassja Kinski and Alun Armstrong.

The film covers a later part of Gauguin's life (Kiefer Sutherland) from 1880 to 1897, when he resigned his job as a stockbroker to paint full-time and journey to Polynesia. It documents how Gauguin befriended Pissarro, felt compelled to paint, abandoned his family and then chronicled his love of Tahitian life.