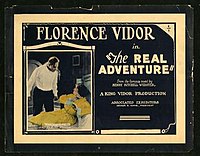 The Real Adventure is a 1922 American silent drama film directed by King Vidor, based on the best-selling novel by Henry Kitchell Webster that was serialized in 1915 and published as a book in 1916. A print of the film is held by the Cinémathèque de Toulous. In February 2020, the film was shown at the 70th Berlin International Film Festival, as part of a retrospective dedicated to King Vidor's career.

As described in a film magazine, impetuous and headstrong Rose Stanton (Vidor) accidentally meets famous attorney Rodney Aldrich (Fillmore) when a conductor rudely accosts her for her streetcar fare. It is love at first sight and, after a brief courtship, they are married. Rose becomes cross at Rodney while on their honeymoon at his mountain lodge when he studies from a law book for an hour. he saves her after she dashes out into a snow storm. Back home, after her husband ridicules her for attempting to study law, she determines to leave him and, using the name Doris Dane, she becomes famous in New York City as the designer of stage dresses. Her husband follows her to the city and, following a reconciliation, they have a complete understanding. The film ends as a child arrives at the Aldrich residence and the real adventure begins.