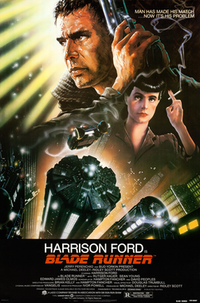 Blade Runner is a 1982 science fiction film directed by Ridley Scott, and written by Hampton Fancher and David Peoples. Starring Harrison Ford, Rutger Hauer, Sean Young and Edward James Olmos, it is loosely based on Philip K. Dick's novel Do Androids Dream of Electric Sheep? (1968). The film is set in a dystopian future Los Angeles of 2019, in which synthetic humans known as replicants are bio-engineered by the powerful Tyrell Corporation to work at space colonies. When a fugitive group of advanced replicants led by Roy Batty (Hauer) escapes back to Earth, burnt-out cop Rick Deckard (Ford) reluctantly agrees to hunt them down.

In 2019 Los Angeles, former policeman Rick Deckard is detained by Officer Gaff, and brought to his former supervisor, Bryant. Deckard, whose job as a "blade runner" was to track down bioengineered humanoids known as replicants and terminally "retire" them, is informed that four replicants are on Earth illegally. Deckard begins to leave, but Bryant ambiguously threatens him and Deckard stays. The two watch a video of a blade runner named Holden administering the Voight-Kampff test, which is designed to distinguish replicants from humans based on their emotional response to questions. The test subject, Leon, shoots Holden on the second question. Bryant wants Deckard to retire Leon and the other three Nexus-6 replicants: Roy Batty, Zhora, and Pris.