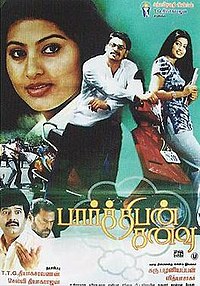 Parthiban Kanavu (English: Parthiban's Dream) is a 2003 Indian Tamil-language magical realism romantic drama film written and directed by Karu Pazhaniappan. The film stars Srikanth and Sneha in lead roles. It had Manivannan and Vivek in supporting roles. Sneha featured in a dual role for the first time in her career. The film's score and soundtrack are composed by Vidyasagar. The film was a sleeper hit in 2003.

Parthiban (Srikanth) is a marketing executive who loves spending time with his friends. Parthiban's parents want him to get married but he does not believe in arranged marriage and waits to see a girl as per his likes and dislikes. One day, Parthiban sees a girl (Sneha) and gets immediately attracted towards her. He follows her and finds her office location. Everyday Parthiban sees her while she is on the way to her office. Also, Parthiban gets to know that her taste and interests match with him and starts to love her.