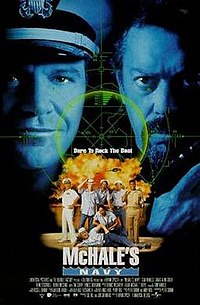 McHale's Navy is a 1997 American military comedy film starring Tom Arnold. It is based on the 1962-1966 television series of the same name. Ernest Borgnine was the only member of the original television show's cast to appear in the film.

On Jake McPherson's Caribbean, on the Island of San Moreno, a trio of important looking men (a Chinese militant, a Russian General, and a European businessman) are meeting with the island's governor. After paying him a suitcase full of money for a special operation, the three men are joined, via helicopter, by Major Jake McPherson Vladakov (Tim Curry), the second best terrorist in the world, who will be in charge of the operation. This entire event is witnessed by a young boy named Roberto who takes pictures of the governor, the Major, and his men.