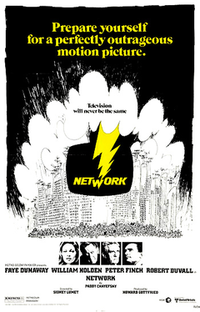 Howard Beale, the longtime anchor of the Union Broadcasting System's UBS Evening News in New York City, learns from friend and news division president Max Schumacher that he has just two more weeks on the air because of declining ratings. The two get drunk and lament the state of their industry. The following night, Beale announces on live television that he will commit suicide on next Tuesday's broadcast. UBS fires him after this incident, but Schumacher intervenes so that Beale can have a dignified farewell. Beale promises he will apologize for his outburst, but once on the air, he launches back into a rant claiming that life is "bullshit." Beale's outburst causes the newscast's ratings to spike, and much to Schumacher's dismay, the upper echelons of UBS decide to exploit Beale's antics rather than pull him off the air. When Beale's ratings seem to have topped out, Diana Christensen, who heads the network's programming department, approaches Schumacher and offers to help him "develop" the news show. He says no to the professional offer, but she also makes a personal offer and the two begin an affair.