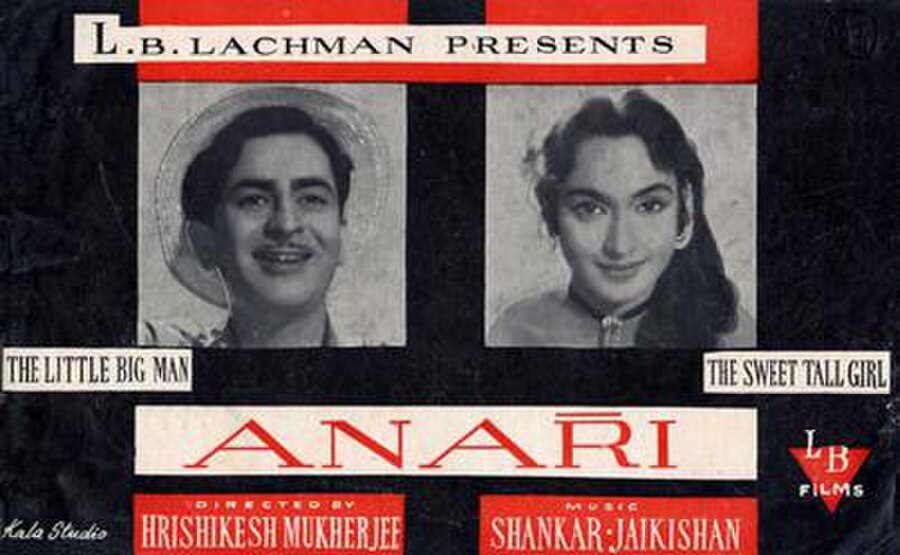 Anari is a 1959 Bollywood comedy film directed by Hrishikesh Mukherjee. The film stars Raj Kapoor, Nutan, Motilal and Lalita Pawar. The music was by Shankar Jaikishan and the lyrics by Hasrat Jaipuri as well as Shailendra. This was among the few movies in which Lalita Pawar played a positive role and Motilal a role with shades of grey. The film was remade in Tamil as Pasamum Nesamum.

Raj Kumar is an honest, handsome, and intelligent young man. Working only as a sole trader painter, he is unable to earn a living, including paying rent to his kind-hearted and talkative landlady, Mrs. D'sa. One day, Raj finds a wallet containing money and returns it to the owner, Mr. Ramnath. Ramnath admires Raj; pleased with his honesty, he employs Raj to work in his office as a clerk. Raj meets Ramnath's maidservant Asha and they fall in love with each other. This all ends when Raj finds out that Asha is really Aarti, the niece of his employer. Unfortunately, his landlady Mrs. D'sa dies suddenly consuming medicine manufactured by Mr. Ramnath. The police conduct a post-mortem and as a result, conclude that someone poisoned Mrs. D'sa. The police take Raj for questioning as the prime suspect, is arrested, and held in jail. In the trial, however, Ramnath admits full responsibility for the tainted medicine, clearing Raj of the charges. Aarti tells Raj she promised Mrs. D'sa she would take care of him, someone who is "as big an idiot as the world is clever," giving a sense that they will marry.