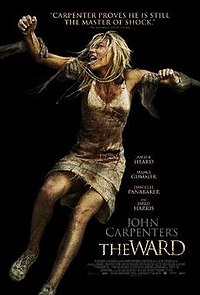 The Ward is a 2010 American supernatural psychological horror film directed by John Carpenter and starring Amber Heard, Mamie Gummer, Danielle Panabaker, Laura-Leigh, Lyndsy Fonseca and Jared Harris. Set in 1966, the film chronicles a young woman who is institutionalized after setting fire to a house, and who finds herself haunted by the ghost of a former inmate at the psychiatric ward.

In rural Oregon, at the North Bend Psychiatric Hospital in 1966, a young patient named Tammy is killed by an unseen force at night.