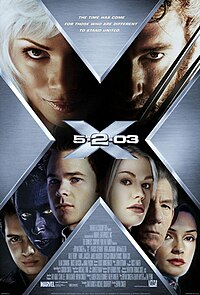 X2 (also marketed as X2: X-Men United and internationally as X-Men 2) is a 2003 American superhero film directed by Bryan Singer and written by Michael Dougherty, Dan Harris and David Hayter, from a story by Singer, Hayter and Zak Penn. The film is based on the X-Men superhero team appearing in Marvel Comics. It is the sequel to X-Men (2000), as well as the second installment in the X-Men film series, and features an ensemble cast including Patrick Stewart, Hugh Jackman, Ian McKellen, Halle Berry, Famke Janssen, James Marsden, Rebecca Romijn-Stamos, Brian Cox, Alan Cumming, Bruce Davison, and Anna Paquin. Its plot, inspired by the graphic novel God Loves, Man Kills, concerns the genocidal Colonel William Stryker leading an assault on Professor Xavier's school to build his own version of Xavier's mutant-tracking computer Cerebro, in order to destroy every mutant on Earth and to "save" the human race from them, forcing the X-Men to team up with the Brotherhood of Mutants, their former enemies, to stop Stryker and save the mutant race.

At the White House, brainwashed teleporting mutant Nightcrawler attacks the President of the United States. He is shot and retreats. Meanwhile, Logan explores an abandoned military installation at Alkali Lake in Alberta for clues to his past, but finds nothing. Jean Grey has been having premonitions and struggles to concentrate as her powers become increasingly difficult to control. Later, Logan returns to Professor Xavier's school for mutants, and Xavier tracks Nightcrawler using Cerebro. Xavier and Cyclops go to question the imprisoned Magneto about the attack, while X-Men Storm and Jean Grey retrieve Nightcrawler. Military scientist Colonel William Stryker approaches the president and receives approval to investigate Xavier's mansion for their ties to mutants in the wake of the recent attack. Stryker's forces invade the school and abduct some of the students. Colossus leads the remaining students to safety while Logan, Rogue, Iceman, and Pyro escape, and Stryker's assistant Yuriko Oyama captures Cyclops and Xavier. During the attack, Logan confronts Stryker, who addresses him as Wolverine and seems to know about his past.