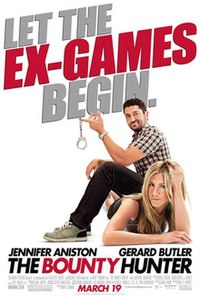 The Bounty Hunter is a 2010 American action comedy film directed by Andy Tennant, starring Jennifer Aniston and Gerard Butler. The story centers on a bounty hunter hired to retrieve his ex-wife, who has skipped bail. The film was released in the United States on March 19, 2010.

Milo Boyd is a former New York Police Department detective who works as a bail enforcement agent (bounty hunter). Milo's ex-wife, Nicole Hurley, is an investigative reporter who has been arrested for assaulting a police officer.