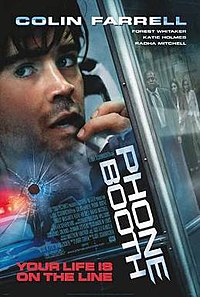 Phone Booth is a 2003 American neo-noir thriller film directed by Joel Schumacher, produced by David Zucker and Gil Netter, written by Larry Cohen and starring Colin Farrell, Forest Whitaker, Katie Holmes, Radha Mitchell, and Kiefer Sutherland. In the film, a mysterious hidden sniper calls a phone booth, and when a young publicist inside answers the phone, he quickly finds his life is at risk. The film received generally positive reviews from critics and was a box office hit, grossing $97 million worldwide against a production budget of $13 million.

Stuart Shepard (Colin Farrell) is an arrogant New York City publicist who has been courting Pamela McFadden (Katie Holmes) behind the back of his wife Kelly (Radha Mitchell). On a routine walk around Times Square, Stu uses the last remaining public phone booth in the city to contact Pam. During the call, he is interrupted by a pizza delivery man, who attempts to deliver a free pizza to him, but Stu rudely turns him away. As soon as Stu completes his call, the phone rings. Stu answers, to find that a man on the phone, who knows his name, warns him not to leave the booth, and says he will call both Pam and Kelly.