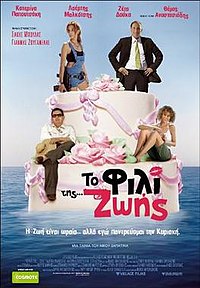 Paschalis (Laertis Malkotsis) is a 30-year-old agronomist, about to marry his beloved Anthoula on the island of Milos. He accidentally embarks on the boat to Sifnos, where he meets Zoi (Catherine Papoutsaki), a beautiful but strange photographer who goes to the island for her own 'purposes'. Things will become even more difficult for Paschalis when a strike of ship captains may cost him his marriage! But things change when together with Zoi he meets a couple (Zeta Douka & Themos Anastasiadis) in Sifnos, who try to help him come together with his future wife in time for the marriage. But many unexpected situations lead to funny incidents and a lot of things are revealed about the four heroes.