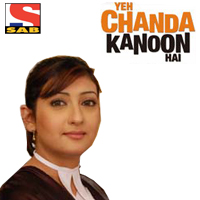 Yeh Chanda Kanoon Hai is an Indian courtroom comedy series starring Juhi Parmar and Aasif Sheikh and aired on SAB TV from 2009 to 2010, occupying the Wednesday to Thursday time slot at 10:30 pm.

Yeh Chanda Kanoon Hai is based on the life of the protagonist Chanda Rani, who is a lawyer and is secretly divorced from another lawyer and her main rival, Vibhuti Narayan. Much of the show takes place in a courtroom. The judge, Prem Kapoor, often shows a soft side towards Chanda Rani, which irritates Vibhuti Narayan, who still has tender feelings for his ex-wife. Each episode deals with a new case, often bizarre, featuring interesting characters.