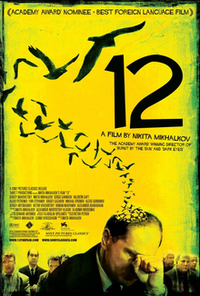 12 is a 2007 crime film by Russian director, screenwriter, producer and actor Nikita Mikhalkov. The film is a Russian-language remake of Sidney Lumet's 1957 film 12 Angry Men, which in turn was based on Reginald Rose's 1955 stage play, Twelve Angry Men, itself based on Rose's 1954 teleplay of the latter's same name.

The jury decides whether a young Chechen boy is guilty of the murder of his stepfather, a Russian military officer. Initially it seems that the boy was the murderer. However, one of the jurors (Sergei Makovetsky) votes in favour of acquittal. Since the verdict must be rendered unanimously, the jurors review the case, and one by one come to the conclusion that the boy was framed. The murder was performed by criminals involved in the construction business. The discussion is repeatedly interrupted by flashbacks from the boy's wartime childhood.