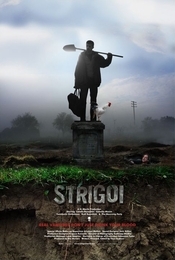 Strigoi is a 2009 British comedy horror film directed by Faye Jackson and starring Constantin Bărbulescu, Camelia Maxim, and Rudi Rosenfeld. Based on Romanian mythology, the film involves Romanian vampires, which are referred to as "strigoi".

After failing to establish himself abroad as a doctor, Vlad returns home to Romania, where he becomes convinced that his village is subject to vampire attacks.