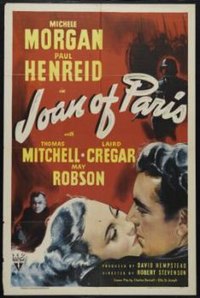 Joan of Paris is a 1942 war film about five Royal Air Force pilots shot down over Nazi-occupied France during World War II and their attempt to escape to England. It stars Michèle Morgan and Paul Henreid, with Thomas Mitchell, Laird Cregar and May Robson in her last role.

In German-occupied Paris, an announcer reports that Royal Air Force bombers have been shot down. Five downed pilots split up and make their way to Paris to try to get help in returning to England. On the way, they break into a tavern in search of civilian clothes. When a German soldier shows up for a drink, Squadron Leader Paul Lavallier (Paul Henreid), a member of the Free French, knocks him out and takes his money.