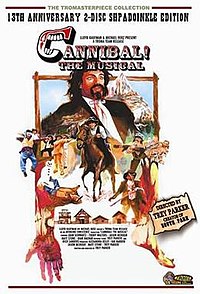 Cannibal! The Musical (originally known as Alferd Packer: The Musical) is a 1993 American independent black comedy horror musical film directed, written, produced, co-scored by and starring Trey Parker while studying at the University of Colorado at Boulder, before reaching fame with South Park alongside his friend Matt Stone who also stars in and produced the film. It is loosely based on the true story of Alferd Packer and the sordid details of the trip from Utah to Colorado that left his five fellow travelers dead and partially eaten. Trey Parker (credited as Juan Schwartz) stars as Alferd Packer, with frequent collaborators Stone, Dian Bachar, and others playing the supporting roles.

The film begins with a reenactment of the gruesome act of cannibalism described by the prosecuting attorney during Alferd Packer's 1883 trial. During this sensationalized account, a haggard Packer (played by Trey Parker) repeatedly insists that was not how it happened. During a break in the trial, Packer is enticed by journalist Polly Pry to tell his side of the story, which he proceeds to do, via flashback. He opens his tale with better times, galloping freely over green fields on his horse, LeAnn during the film's first song, "Shpadoinkle".