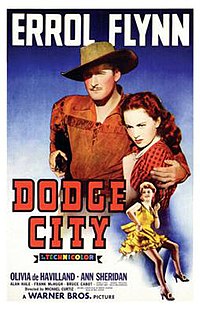 Dodge City is a 1939 American Western film directed by Michael Curtiz and starring Errol Flynn, Olivia de Havilland, and Ann Sheridan. Based on a story by Robert Buckner, the film is about a Texas cattle agent who witnesses the brutal lawlessness of Dodge City, Kansas and takes the job of sheriff to clean the town up. Filmed in Technicolor, Dodge City was one of the highest-grossing films of the year. This was the 5th of 8 movies that de Havilland and Flynn appeared in together.

The action of the film starts with Colonel Dodge (Henry O'Neill) arriving on the first train and subsequently opening the new railroad line that links Dodge City with the rest of the world. A few years later, Dodge City has turned into the "longhorn cattle center of the world and wide-open Babylon of the American frontier, packed with settlers, thieves and gunmen—the town that knew no ethics but cash and killing". In particular, it is Jeff Surrett (Bruce Cabot) and his gang who kill, steal, cheat and, generally, control life in Dodge City without ever being brought to justice. Any new sheriff, sworn into office in Dodge, is quickly driven out of town by Surrett and his cronies.