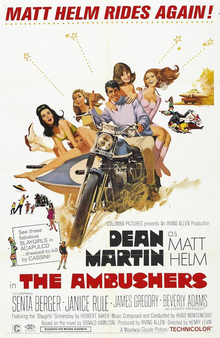 The Ambushers is a 1967 American adventure comedy spy-fi film starring Dean Martin as Matt Helm, along with Senta Berger and Janice Rule. It is the third of four films in the Matt Helm series, and is very loosely based upon the 1963 novel of the same name by Donald Hamilton as well as The Menacers (1968) that featured UFOs and a Mexican setting. When a government-built flying saucer is hijacked mid-flight by Jose Ortega, the exiled ruler for an outlaw nation, secret agent Matt Helm and the ship's former pilot Sheila Sommers are sent to recover it.

Helm is sent to the ICE (Intelligence and Counter Espionage) Training Headquarters to uncover a traitor in the organisation. While there he meets ICE agent Sheila Sommers, a test pilot who has been recovered from a Central American jungle with no memory of what happened to the experimental flying saucer she flew. Due to the electo-magnetic power of the saucer, only a woman is able to fly it, males of the species are killed by the energy.