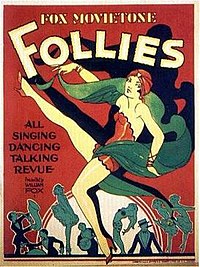 George Shelby, a boy from the Southern United States, comes to the city to dissuade Lila, his sweetheart, from embarking on a stage career and finally buys out the controlling interest in the revue so that he can fire her. On the opening night, however, she goes onstage when the prima donna of the show becomes temperamental, and she proves to be a big hit. At this development, George is able to sell the show back to the producer, who had previously lacked confidence in his investment and planned to take advantage of the youth's inexperience.