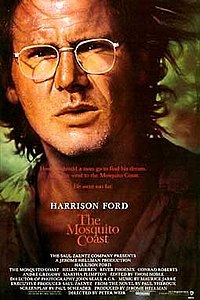 The Mosquito Coast is a 1986 American drama film directed by Peter Weir and starring Harrison Ford, Helen Mirren, Andre Gregory, and River Phoenix. It is based on the 1981 novel of the same name by Paul Theroux. The film tells the story of a family that leaves the United States and tries to find a happier and simpler life in the jungles of Central America. However, their jungle paradise quickly turns into a dystopia as their stubborn father's behavior becomes increasingly erratic and aggressive. It was shot in the cities of Cartersville and Rome in Georgia, in addition to Baltimore, Maryland, and Belize.

Allie Fox is a brilliant but stubborn inventor who has grown fed up with the American Dream and consumerism. Furthermore, he believes that a nuclear war is on the horizon as a result of American greed and crime. After Allie and his eldest son Charlie acquire the components at a local dump, he finishes assembling his latest creation, an ice machine known as Fat Boy. Allie's boss, Mr. Polski, an asparagus farm owner, complains that Allie is not tending to the asparagus, which is rotting. Allie, Charlie, and Allie's youngest son, Jerry, meet Mr. Polski, and Allie shows him "Fat Boy." The machine leaves Polski unimpressed. As he drives past the fields, a dejected Allie comments on immigrants picking asparagus, and says that where they come from, they might think of ice as a luxury.