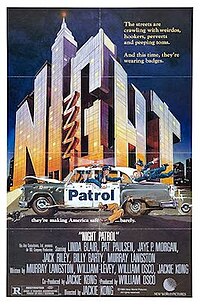 Melvin White is an inept policeman who is demoted to night patrol by his pathologically lying captain, who has excessive flatulence. White's partner is Kent Lane, who has been a police officer for ten years and loves nothing more than having sex with women in the back of his police car. Fellow police officer Sue Perman is attracted to White, but White does not understand her hints and thinks of her as only a buddy. White and Lane get involved in various situations that include a couple parked in front of a fire hydrant, people smoking marijuana which they join in, and a male rape victim with a high-pitched voice. In between his duties as a police officer, White is the stand-up comedian The Unknown Comic at night. While in his persona, White wears a paper bag over his head that has holes for his eyes and mouth. White is popular as The Unknown Comic, and he has a chance to become even more famous and rich when a talent agent seeks him out. Edith Hutton, a fan of White, is attracted to The Unknown Comic and wants to discover who is under the paper bag. Hutton is even willing to leave her current boyfriend for him. White also has sessions with a psychiatrist.