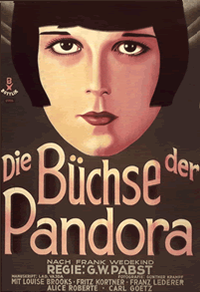 Pandora's Box is a 1929 German silent drama film directed by Georg Wilhelm Pabst, and starring Louise Brooks, Fritz Kortner, and Francis Lederer. The film follows Lulu, a seductive, thoughtless young woman whose raw sexuality and uninhibited nature bring ruin to herself and those who love her. It is based on Frank Wedekind's plays Erdgeist (1895) and Die Büchse der Pandora (1904).

Lulu is the mistress of a respected, middle-aged newspaper publisher, Dr. Ludwig Schön. One day, she is delighted when an old man, her "first patron", Schigolch, shows up at the door to her highly contemporary apartment. However, when Schön also arrives, she makes Schigolch hide on the balcony. Schön breaks the news to Lulu that he is going to marry Charlotte von Zarnikow, the daughter of the Minister of the Interior. Lulu tries to get him to change his mind, but when he discovers the disreputable-looking Schigolch, he leaves. Schigolch then introduces Lulu to Rodrigo Quast, who passed Schön on the stair. Quast wants her to join his new trapeze act.