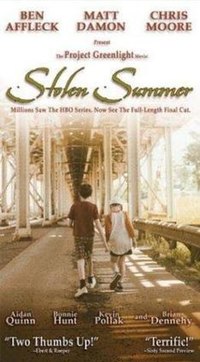 Stolen Summer is a 2002 drama film about a Catholic boy who befriends a terminally ill Jewish boy and tries to convert him, believing that it is the only way the Jewish boy will get to Heaven. Directed by first time writer/director Pete Jones, Stolen Summer is the first film produced for Project Greenlight, an independent film competition created by Ben Affleck and Matt Damon, and sponsored by HBO. Project Greenlight aired on HBO as a documentary series chronicling the selection of Jones's script from approximately seven thousand entries, and the production of the film in Chicago in 2001.