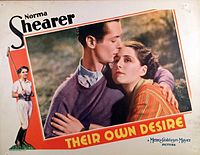 Their Own Desire is a 1929 American pre-Code romantic drama film directed by E. Mason Hopper and starring Norma Shearer, Belle Bennett, Lewis Stone, Robert Montgomery, and Helene Millard. The film was adapted by James Forbes and Frances Marion from the novel by Sarita Fuller; Lucille Newmark wrote the titles. It is also the last MGM film in the 1920s. Shearer was nominated for the Academy Award for Best Actress, but lost to herself for The Divorcee.

A young woman is upset by the knowledge that her father is divorcing her mother in order to marry another woman. Her own feelings change, however, when she falls in love with a young man who turns out to be the son of her father's new love.