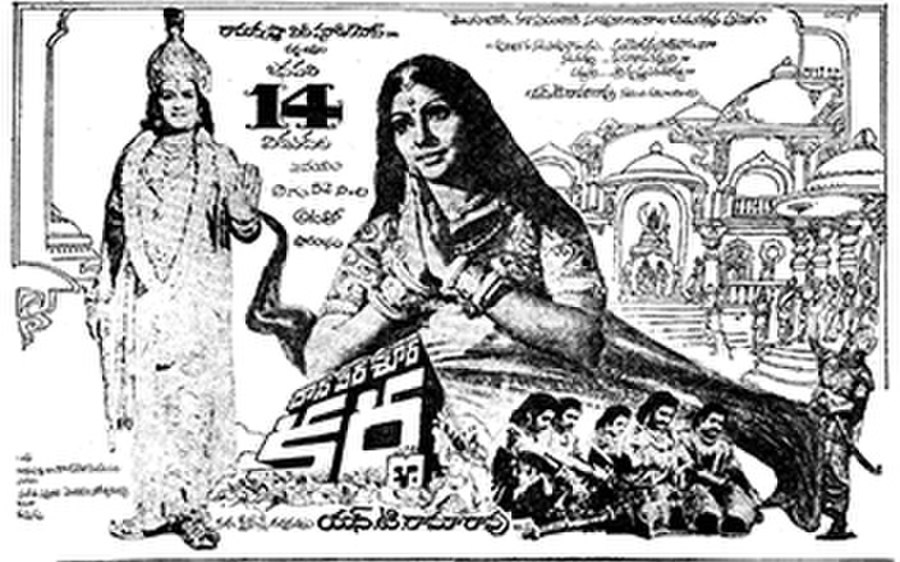 Daana Veera Soora Karna is a 1977 Indian Telugu-language Hindu historical film co-written, produced and directed by N. T. Rama Rao under his Ramakrishna Cine Studios banner. Based on the life of Karna from the Mahabharata, it stars Rama Rao playing three roles: the title character, Duryodhana and Krishna and also starred his sons Nandamuri Harikrishna and Nandamuri Balakrishna, who played the roles of Arjuna and Abhimanyu respectively. Music was composed by Pendyala Nageswara Rao. Made on a budget , the film was a commercial success, grossing 1.52 crore and became the highest-grossing Telugu film at that time. It is regarded as one of the greatest films of Telugu cinema.

The film begins with a box containing a baby boy floating in river Ganga, rescued by charioteer Adhiratha, he adopts him and names him as Karna. Years roll by, once Karna spots Dronacharya taking off Ekalavya's thumb to make Arjuna as a supreme. Karna accuses the deed and challenges that he will always be a competitor for Arjuna. At that moment, Ekalavya's sister Vrishali loves Karna. After that, Karna reaches Parasurama, asks him to be his mentor which he accepts and makes Karna expert in all fields of archery. One day when Parasurama sleeps on his lap when Indra takes the form of bug and bites Karna but bears the pain. Due to the blood flow, Parasurama awakes, recognizes him as a Kshatriya and curses him that the arts he has learned will become incapable. But afterward, he realizes him as a Sutaputra, but unable to take back his curse, so, he compensates with his bow, couch, and chariot. Now Karna moves towards the Hastinapuram, on the way, Indra in the form of a lion, tries to kill a cow of a Brahmin. To protect it, Karna shoots an arrow which misfires, the cow dies and the Brahmin curses him to die in a helpless situation. After reaching the capital, a baby girl taking ghee accidentally slips. Karna not able see her weeping, so, squeezes the ghee from the soil when Bhudevi also curses him that in his last stage he will be insulted by crushing his chariot wheel into her. At the fort, tournaments have been conducted where Dronacharya praises Arjuna as a master of archery when Karna arrives and challenges him. But Karna is insulted on account of his low birth when Duryodhana saves his pride, by making him king of Anga. Here, Karna dedicates his life to Duryodhana and both of them become soulmates.