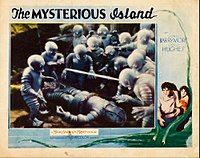 The Mysterious Island is a 1929 American science fiction film directed by Lucien Hubbard based on Jules Verne's 1874 novel L'Île mystérieuse (The Mysterious Island). It was photographed largely in two-color Technicolor and released by Metro-Goldwyn-Mayer as a part-talkie, with some scenes that featured audible dialog and some that had only synchronized music and sound effects.

On a volcanic island near the kingdom of Hetvia rules Count Dakkar, a benevolent leader and scientist who has eliminated class distinction among the island's inhabitants. Dakkar, his daughter Sonia and her fiance, engineer Nicolai Roget have designed a submarine which Roget pilots on its initial voyage just before the island is overrun by Baron Falon, despotic ruler of Hetvia. Falon sets out after Roget in a second submarine and the two craft, diving to the ocean's floor, discover a strange land populated by dragons, a giant octopus and an eerie undiscovered humanoid race.