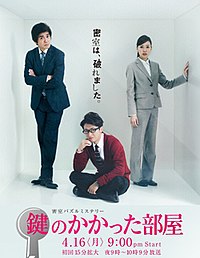 is a 2012 Japanese Getsuku television drama series under the locked-room mystery genre broadcast by Fuji Television from April 16 to June 25, 2012. It is based on the Kei Enomoto novel series by Yusuke Kishi titled , , and . The drama stars Satoshi Ohno, Erika Toda, and Koichi Sato, and received a viewership rating of 16.0% on average. A drama special was later aired on January 3, 2014, which received a viewership rating of 15.9%.

Kei Enomoto works for a Tokyo-based security company. Enomoto is not an easy person to familiarise oneself with, always calm, quiet, and unapproachable, with a past that is unknown to others. Considered a maniac in Physics, Science, and Architecture, he is certain of the fact that there is no lock that cannot be broken. One day, Enomoto is approached by attorney Junko Aoto, who asks Enomoto to help reveal a mystery behind a locked room murder. Possessing a vast amount of knowledge, Enomoto works side by side with Aoto and her senior attorney in the law firm, Gou Serizawa. Aoto is pure and acts upon her instincts, whereas Serizawa is a prideful elitist who sees time as money and will not take on any job that is not profitable. As the story unfolds, the three work closely together to solve locked room mysteries one after another.