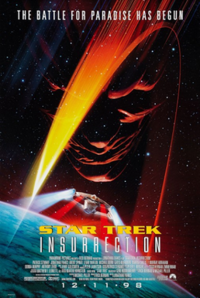 Star Trek: Insurrection is a 1998 American science fiction film directed by Jonathan Frakes. It is the ninth film in the Star Trek film series, as well as the third to star the cast of Star Trek: The Next Generation, with F. Murray Abraham, Donna Murphy, and Anthony Zerbe appearing in main roles. In the film, the crew of the USS Enterprise-E rebels against Starfleet after they discover a conspiracy with a species known as the Son'a to steal the peaceful Ba'ku's planet for its rejuvenating properties.

Lieutenant Commander Data (Brent Spiner) is temporarily transferred to an undercover mission observing the peaceful Ba'ku people. While on their planet, he malfunctions and reveals the presence of the joint Federation–Son'a task force observing the Ba'ku. Admiral Matthew Dougherty (Anthony Zerbe) contacts the USS ''Enterprise''-E to obtain Data's schematics for recovery purposes but adamantly states the presence of the Enterprise is not needed. The crew decides to ignore these orders and takes the Enterprise to capture Data. Captain Jean-Luc Picard (Patrick Stewart) becomes suspicious of Dougherty's insistence that the Enterprise is no longer needed and orders the cause of Data's malfunction to be investigated. The crew discovers that the Ba'ku possess advanced technology, but have rejected its use to live simpler lives. Due to unique "metaphasic particles" emanating from their planet's rings, they are effectively immortal. By contrast, the Federation's allies, the Son'a, are a decrepit race who rely on medical technology to prevent death; their excessive use of cosmetic surgery gives them a mummified appearance. The Enterprise crew also begin to experience the rejuvenation effects of the planet: Lt. Commander Geordi La Forge (LeVar Burton) finds his eyes have regenerated and he no longer requires ocular implants, Commander William Riker (Jonathan Frakes) and Counselor Deanna Troi (Marina Sirtis) rekindle their long-abandoned relationship, and Picard develops a romantic relationship with the Ba'ku woman Anij (Donna Murphy).