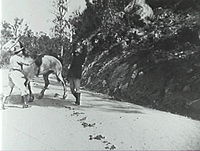 Thunderbolt is a 1910 film in the genre of "outlaw" films at the time that tended to glorify the life of the outlaw "Bushrangers" that roamed the Australian outback in pre-commonwealth days. Shortly after this movie was made, the government of New South Wales banned the manufacture of this type of film on the basis that they were promoting crime.