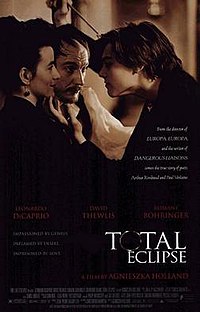 The older Paul Verlaine meets Arthur Rimbaud's sister, Isabelle, in a café in Paris. Isabelle and her mother want Verlaine to hand over any copies he may still have of Rimbaud's poems so that they can burn them; they fear the lewdness of his writings. Verlaine reflects on the wild relationship he had had with Rimbaud, beginning when the teenaged Rimbaud had sent his poetry to Verlaine from his home in the provinces in 1871. Verlaine, instantly fascinated, impulsively invites him to his rich father-in-law's home in Paris, where he lives with his young, pregnant wife. The wild, eccentric Rimbaud displays no sense of manners or decency whatsoever, scandalising Verlaine's pretentious, bourgeois in-laws.