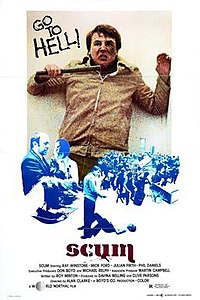 Scum is a 1979 British crime drama film directed by Alan Clarke and starring Ray Winstone, Mick Ford, Julian Firth and John Blundell. The film portrays the brutality of life inside a British borstal. The script was originally filmed as a television play for the BBC's Play for Today series in 1977. However, due to the violence depicted, it was withdrawn from broadcast. Two years later, director Alan Clarke and scriptwriter Roy Minton remade it as a film, first shown on Channel 4 in 1983. By this time the borstal system had been reformed. The original TV version was eventually allowed to be aired eight years later in 1991.

Three young men arrive at borstal by prison van: Carlin, who has taken the blame for his brother's theft of scrap metal; Angel for stealing a car and Davis for escaping from an open institution. Each is allocated a room; Angel and Davis get private rooms while Carlin is sent to a dormitory.