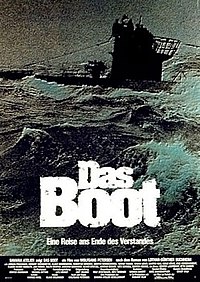 Das Boot (, English: "The Boat") is a 1981 West German war film written and directed by Wolfgang Petersen, produced by Günter Rohrbach, and starring Jürgen Prochnow, Herbert Grönemeyer, and Klaus Wennemann. It has been exhibited both as a theatrical release and as a TV miniseries (1985), in several different home video versions of various running times, and in a director's cut version supervised by Petersen in 1997.

Lt. Werner is a war correspondent on the in October 1941. He is driven by its captain and chief engineer to a raucous French bordello where he meets some of the crew. Thomsen, another captain, gives a crude drunken speech to celebrate his ''Ritterkreuz'' award, in which he mocks Adolf Hitler.