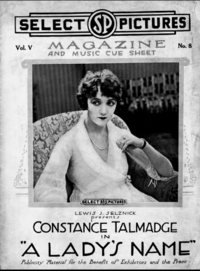 A Lady's Name is a 1918 American silent drama-comedy film directed by Walter Edwards. The film stars Constance Talmadge, Harrison Ford and Emory Johnson. The film was released on December 10, 1918, by Select Pictures.

Novelist Mabel Vere (Constance Talmadge) is engaged to Gerald Wantage (Emory Johnson). Mabel is also writing a new book. She needs ideas for her new book. She hatches a plan where she will advertise for a husband and see if the candidates provide the literary inspiration she needs. Gerald is a "stuffed Shirt" who angrily objects to her plan. She proceeds anyway.