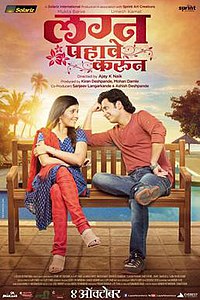 Lagna Pahave Karun is a 2013 Indian Marathi-language romantic comedy film directed by Ajay Naik, and produced by Kiran Deshpande and Mohan Damle under the banners of Solariz International and Sprints Arts Creations respectively.

Nishant Barve (Umesh Kamat) is an Indian software designer who works and stays in America. During his return to India he loses his job in the US. He decides to meet and inform his fiancée, Madhura Godbole (Priyanka Barve). When Nishant is going to meet his fiancée he accidentally meets Aditi Tilak (Mukta Barve), a girl who plans to have her own matrimonial agency. Coming to know that his fiancée is more interested in American lifestyle than him Nishant breaks up with her.