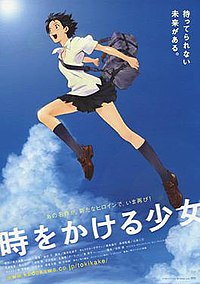 The Girl Who Leapt Through Time 2006

is a 2006 Japanese-animated science fiction romance film produced by Madhouse, directed by Mamoru Hosoda and written by Satoko Okudera. Released by Kadokawa Herald Pictures, the film is a loose sequel to the 1967 novel of the same name by Yasutaka Tsutsui and shares the basic premise of a young girl who gains the power of time travel and repeatedly relives the same day in a time loop, but with a different story and characters than the novel. Riisa Naka voices teenager Makoto Konno, who learns from Kazuko Yoshiyama, Makoto's aunt and the protagonist to the original story, that Makoto has the power to travel through time. Makoto begins using the time-leaps frivolously to fix problems.

At Kuranose High School in Tokyo, Japan, 17 year old Makoto Konno discovers a message written on a blackboard and ends up inadvertently falling upon a walnut-shaped object. On her way home, she is ejected into a railroad crossing when the brakes on her bicycle fail and is hit by an oncoming train, but finds herself transported back to the point in time when she was riding her bicycle right before the accident. After entering the Tokyo National Museum to meet with Kazuko Yoshiyama, she explains to Makoto after hearing her story that clearly, she now has the power to "time-leap", to literally leap through time. At first, Makoto uses her powers to avoid being late, getting perfect grades, and even relive a single karaoke session for several hours, but soon discovers her actions can adversely affect others.