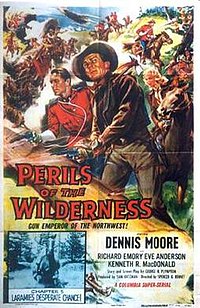 Perils of the Wilderness 1956

Perils of the Wilderness is a 1956 American Western Serial film directed by Spencer Gordon Bennet and starring Dennis Moore.

US Deputy Marshal Dan Lawson teaming up with RCMP Sergeant Gray to go undercover and capture the nefarious smuggler Bart Randall. Lawson, posing as an outlaw called Laramie, is ready to infiltrate the gang led by Randall, a self-styled Gun Emperor of the Northwest, who is wanted for murder and bank robbery in the United States. In addition to the difficulties inherent in the mission, Lawson has other issues to deal with, including the use of a fake totem and flying a hydra plane to overawe the menacing Indians and renegade whites. He also is aided in his search by Donna Blaine, who is suspected at first of giving information to Randall, but who in reality is a Canadian secret agent investigating Randall's illegal gun trading with the Indians.