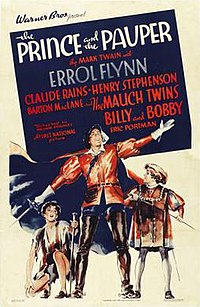 The Prince and the Pauper 1937

The Prince and the Pauper is a 1937 film adaptation of the 1881 novel of the same name by Mark Twain. It starred Errol Flynn, twins Billy and Bobby Mauch in the title roles, and Claude Rains and has been described as "a kids' fantasy."

In Tudor England, two boys are born on the same day in the most different circumstances imaginable. Tom Canty (Billy Mauch) is the son of vicious criminal John Canty (Barton MacLane), while Edward Tudor (Bobby Mauch) is the Prince of Wales and the son of King Henry VIII of England (Montagu Love). One grows up in poverty, hungering for something better for himself and his family, the other in isolated luxury, with a strong curiosity about the outside world.