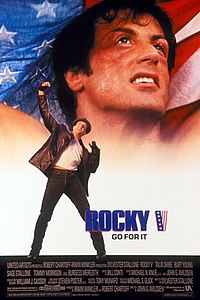 Rocky V is a 1990 American sports drama film directed by John G. Avildsen (the first time since the first film of the franchise), written by and starring Sylvester Stallone. It is the sequel to Rocky IV (1985) and is the fifth installment in the Rocky franchise. It also stars Talia Shire, Burt Young, Sage Stallone, Tommy Morrison and Burgess Meredith. In the film, a financially struggling Rocky Balboa (Stallone) agrees to train protégé Tommy Gunn (Morrison) at the gym once owned by Balboa's trainer, Mickey Goldmill (Meredith).

In the aftermath of his victory over Ivan Drago in Moscow, Rocky finds himself experiencing physical complications from the fight. Rocky, his wife Adrian, his brother-in-law Paulie, and his trainer Tony "Duke" Evers return to the United States where they are greeted by Rocky's son, Robert Jr. At a press conference, boxing promoter George Washington Duke attempts to goad Rocky into fighting his boxer, Union Cane, who is the top-rated challenger, but Rocky declines.