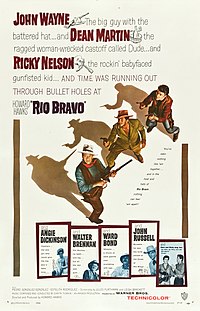 Rio Bravo is a 1959 American Western film produced and directed by Howard Hawks and starring John Wayne, Dean Martin, Ricky Nelson, Angie Dickinson, Walter Brennan, and Ward Bond. Written by Jules Furthman and Leigh Brackett, based on the short story "Rio Bravo" by B. H. McCampbell, the film is about the sheriff of the town of Rio Bravo, Texas, who arrests the brother of a powerful local rancher for murder and then must hold the man in jail until the arrival of the United States Marshall. With the help of a "cripple", a drunk and a young gunfighter, they hold off the rancher's gang. Rio Bravo was filmed on location at Old Tucson Studios outside Tucson, Arizona, in Technicolor.

Joe Burdette, the spoiled younger brother of wealthy landowner Nathan Burdette, taunts town drunk Dude by tossing money in a spittoon. The Sheriff, John T. Chance, stops Dude from reaching into the spittoon, prompting Dude to lash out and knock him unconscious. Joe starts to beat up Dude for fun, shooting and killing an unarmed bystander who attempts to stop him. Chance recovers and follows Joe into Nathan Burdette's personal saloon, and with help from a penitent Dude, overcomes Nathan's men and arrests Joe for murder.