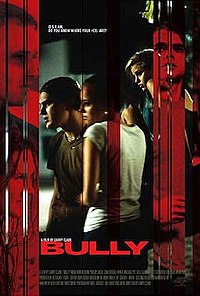 Bully is a 2001 American crime film directed by Larry Clark, and starring Brad Renfro, Bijou Phillips, Rachel Miner, Michael Pitt, Leo Fitzpatrick, Daniel Franzese, Kelli Garner, and Nick Stahl. Its plot follows a group of teenagers in South Florida who enact a murder plot against their mutual friend who has emotionally, physically, and sexually abused them for years.

South Florida high school dropouts Ali Willis and Lisa Connelly befriend Bobby Kent and Marty Puccio, employees at a local deli. The four all go out on a double date. While in a parked car, Ali performs oral sex on Bobby, while Lisa and Marty have sex in the back seat. Lisa later learns she is pregnant, but is afraid that the child is Bobby's instead of Marty's, since Bobby raped her after beating Marty unconscious.