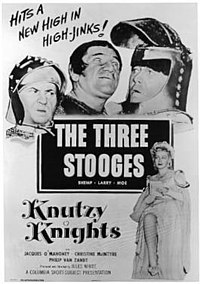 Knutzy Knights is a 1954 short subject directed by Jules White starring American slapstick comedy team The Three Stooges (Moe Howard, Larry Fine and Shemp Howard). It is the 156th entry in the series released by Columbia Pictures starring the comedians, who released 190 shorts for the studio between 1934 and 1959.

The Stooges are troubadours sent to cheer up the brokenhearted Princess Elaine (Christine McIntyre). Her father, the King, (Vernon Dent) has pledged her hand in marriage to the Black Prince (Philip Van Zandt), but she loves Cedric, the local blacksmith (Jock Mahoney).