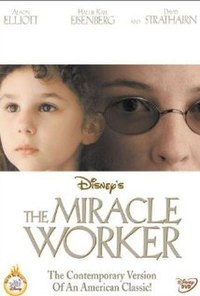 The Miracle Worker is a 2000 biographical television film based on the 1959 play of the same title by William Gibson, which originated as a 1957 broadcast of the television anthology series Playhouse 90. Gibson's original source material was The Story of My Life, the 1902 autobiography of Helen Keller. The play was adapted for the screen twice before, in 1962 and 1979. The film is based on the life of Helen Keller and Anne Sullivan's struggles to teach her.

In the 1880s, Anne Sullivan, and her efforts in working with young Helen Keller. The movie focuses on Anne's struggle to draw Helen, a blind and prelingually deaf girl out of her world of darkness and silence. Helen has been unable to communicate with her family except through physical temper tantrums since an illness took her eyesight and hearing from her at the age of 19 months old. She is allowed to eat other people's food with her hands, knock over or break items, and basically do whatever else she desires. All of this while being looked at with pity by her family. Her family loves her, but they are all convinced she is a dumb, soft-brained, and savage child with the intelligence of an animal who will never learn anything. She is barely pacified with candy when she throws a tantrum, and is headed toward mental institutionalization in an asylum when Anne enters her life as Helen's parents' last-ditch effort to avoid the inevitable.