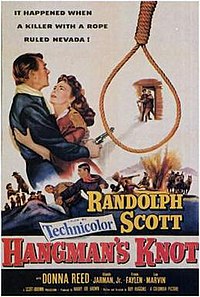 Hangman's Knot is a 1952 American Western film written and directed by Roy Huggins and starring Randolph Scott. The film is about a group of Confederate soldiers, unaware that the Civil War is over, who intercept a shipment of gold escorted by Union cavalry troops and are then pursued by a renegade posse. Hangman's Knot was filmed on location in the Alabama Hills in Lone Pine, California.

In the spring of 1865 in Nevada, a small band of Confederate soldiers disguised as civilians intercept a shipment of gold escorted by Union cavalry troops. Following a heated battle, Confederate Major Matt Stewart (Randolph Scott) learns from a dying Union officer that the war ended a month earlier. Matt and his men transport the gold as planned to the scheduled rendezvous with Captain Petersen (Glenn Langan) who has been scouting the area disguised as a travelling peddler. When Petersen confirms that he knew the war was over, but made no attempt to tell the men, hot-headed Rolph Bainter (Lee Marvin) shoots him dead. The men briefly debate what to do with the gold. As ranking officer, Matt decides they will take the gold back to the South to help finance their country's reconstruction.