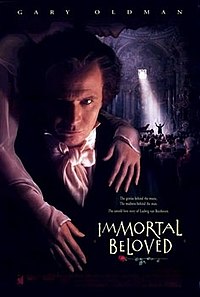 Immortal Beloved is a 1994 biographical film about the life of composer Ludwig van Beethoven (played by Gary Oldman). The story follows Beethoven's secretary and first biographer Anton Schindler (Jeroen Krabbé) as he attempts to ascertain the true identity of the Unsterbliche Geliebte (Immortal Beloved) addressed in three letters found in the late composer's private papers. Schindler journeys throughout the Austrian Empire interviewing women who might be potential candidates as well as through Beethoven's own tumultuous life.

When Ludwig van Beethoven dies, his assistant and close friend Schindler deals with his last will and testament. It reads that his estate, music and affairs will be left to his "immortal beloved", but there remains a question as to who is Beethoven's "immortal beloved", an unnamed woman mentioned in one of his letters. Schindler embarks on a quest to find out. He meets the women who played a part in Ludwig's life; through their stories, retrospective footage of Beethoven from his younger years until his death is featured as the film progresses. The conclusion ultimately is that the individual is Johanna Reiss, the daughter of Anton Van Reiss, a prosperous Viennese upholsterer. In the film, she becomes pregnant by Beethoven; when by an accidental turn of events he does not marry her in time, she marries his brother, Kaspar. The love turns to hate, worsened by the long legal battle between Beethoven and Johanna over custody over their son, Karl van Beethoven (whom everyone believes is Beethoven's nephew), following Kaspar's death. Finally, Ludwig gets custody over his "nephew", but the strict upbringing and promotion of the boy as another child prodigy—which Karl himself knows all too well he is not—leads to Karl attempting suicide. Beethoven is blamed and his reputation is ruined.