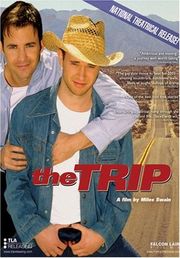 The Trip is a 2002 epic gay romance film directed by Miles Swain. It traces the relationship between two men from their initial meeting in 1973 until 1984.

The time is the socially turbulent 1970s, when radical politics and the emerging gay rights movement clashed with the rigidly conservative establishment. At a swanky L.A. party, lean and lanky Tommy introduces himself to sexually repressed Alan. Tommy has long blond hair, and is openly gay with a glib sense of humor. The comparatively short-haired, muscular Alan is a member of the Young Republicans and an aspiring journalist. Alan is working on his first book, a treatise on homosexuality, and he invites Tommy over for dinner to interview him for the book. Their connection is so intense that Alan's kooky girlfriend Beverly suspects something more than an interview is going on and angrily departs.