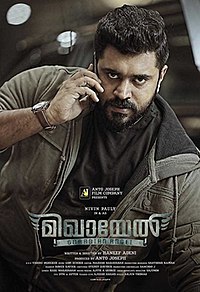 Mikhael is a 2019 Indian Malayalam-language action thriller film written and directed by Haneef Adeni. It stars Nivin Pauly in the title role. Music is composed by Gopi Sundar. The film released on 18 January 2019.

Businessman and gold smuggler George Peter and his driver are killed under mysterious circumstances. Police investigators Muhammed Easa and Isaac discover that it was carried out with a surgical blade, causing them to think a doctor was behind it. They start investigating medical shops. At the same time, Marco JR, George's brother, meets Davis and his sons – their rivals – to ask whether it was their work. Davis's son Abraham starts speaking in a condescending manner, enraging Marco and provoking him to shoot Abraham.During his funeral, Easa asks Davis if it was Marco. Davis does not tell him, thinking that he could seek revenge on his own.Some days after an unknown person shoots Patrick – the mid stander between the 2 gangs – Easa and Isaac take him to Star Hospital where he gets murdered despite being protected with maximum security. This solidifies Easa and Isaac's theory that the murderer is a doctor.