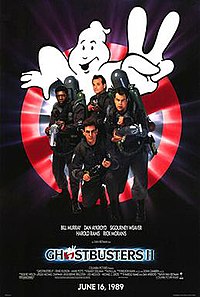 Ghostbusters II is a 1989 American fantasy comedy film directed by Ivan Reitman and written by Dan Aykroyd and Harold Ramis. It stars Bill Murray, Aykroyd, Sigourney Weaver, Ramis, Rick Moranis, Ernie Hudson, and Annie Potts. It is the sequel to the 1984 film Ghostbusters and the second film in the Ghostbusters franchise. Set five years after the events of the first film, the Ghostbusters have been sued and put out of business after the destruction caused during their battle with the demi-god Gozer. When a new, powerful, paranormal threat emerges, the Ghostbusters reform to combat it and save the world.

Five years after saving New York City from destruction by the demigod Gozer, the Ghostbusters have been sued for the property damage incurred and barred from investigating the supernatural, forcing them out of business. Raymond Stantz owns an occult bookstore and works as a children's entertainer alongside Winston Zeddemore. Egon Spengler works in a laboratory experimenting with human emotions, and Peter Venkman hosts a television show about psychics.