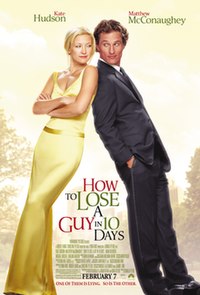 How to Lose a Guy in 10 Days is a 2003 romantic comedy film directed by Donald Petrie, starring Kate Hudson and Matthew McConaughey. It is based on the picture book of the same name by Michele Alexander and Jeannie Long. The book has no narrative, only a list of comedic dating "don'ts", so the characters and plot were created specifically for the film. In the film, advertising executive Benjamin Barry makes a bet that he can make any woman fall in love with him, while women's magazine writer Andie Anderson plans to write an article about how she led her boyfriend to dump her, putting them at cross-purposes after they choose each other as their romantic partners. Andie employs a number of the dating "don'ts" from the picture book in her efforts to get Ben to break up with her.

Andie Anderson is a writer for the women's magazine Composure as the subject-matter expert for a series of "How to" articles. She is bored and wishes she could write about more serious topics. Michelle, Andie's friend, experiences yet another break-up, and she becomes despondent and says she is not attractive enough. Andie argues that the problem is rather her needy, excessively emotional behavior with men, and is inspired to write an article titled "How to Lose a Guy in 10 Days" in order to prove her point; she will begin dating a man and drive him away within 10 days simply by imitating Michelle's behavior.