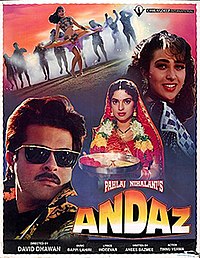 Ajay (Anil Kapoor) an intelligent ex-student of the S. T. School is appointed in the same school as a teacher. Jaya (Karisma Kapoor), who studies in his class harasses him by playing mischievous pranks. Ajay's refusal to enter into a romantic relationship with Jaya upsets her. She challenges him that she will one day become his wife. In a hurry he marries Saraswati (Juhi Chawla), an illiterate orphan girl. Jaya befriends Saraswati by teaching her everything from cooking to reading and writing. One day, some terrorists attack the school and take the children as hostages. Ajay, Jaya and all are trapped. In between Jaya gives her life to save Ajay, there Saraswati reveals that she knows about Jaya's love for Ajay and asks Ajay to marry her on the spot by putting a mangalsutra around her neck. Jaya refuses saying that she will come back in their lives again, this time as Ajay's and Saraswati's daughter. Jaya dies at the end of the film.